Noah Silbert and I wrote a book about using Bayesian multilevel models for linguistic research using the ‘brms’ package in R. The book will be available in print in spring 2023.

The bookdown version of the book is available here:  https://santiagobarreda.github.io/bmmrmd/ 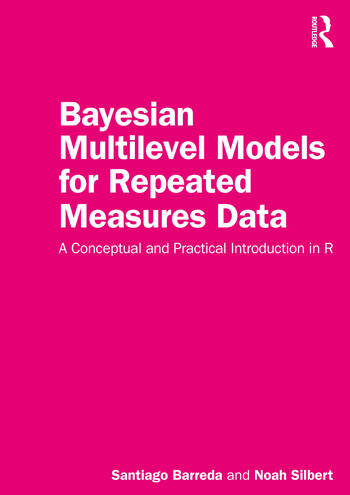 Here’s a bit of what we say in the preface about why this book exists:

This book presents an introduction to the statistical analysis of repeated measures data using Bayesian multilevel regression models. Our approach is to fit these models using the brms package and the Stan programming language in R. This book introduces mathematical and modeling concepts in plain English, and focuses on understanding the visual/geometric consequences of different regression model structures rather than on rigorous mathematical explanations of these.

Statistical modeling is as much a coding challenge as it is a mathematical challenge. As any programmer with some experience knows, copying existing scripts and modifying them slightly is an excellent way to learn to code, and often a new skill can be learned shortly after an understandable example can be found. To that end, rather than use a different toy data set for every new topic introduced, this book presents a set of fully worked analyses involving increasingly complicated models fit to the same experimental data.

Repeated measures data is data where multiple observations come from the same ‘source’ (discussed in more detail in section 4.2). Basically, any time you have data with more than one observation from any given source, you have repeated measures data. Repeated measures data is very common in linguistics, and the norm in many areas of research. For example, you might ask participants in an experiment to hit a button as soon as they hear a buzz, and repeat this for 100 trials per participant. Repeated measures data can naturally lead to independent data-level variation (the lower level) and parameter level variation (the upper level). For example, reaction times to hit a button vary within-participants (the data/lower level), but average reaction times will also likely vary between participants (the upper/parameter level) in a systematic manner. Using multilevel models to analyze repeated measures data lets you independently model these two levels of variation. Using a Bayesian multilevel model allows you to build flexible models that provide you with all sorts of useful information.

One obstacle to the proper analysis of repeated measures data is that this requires models that are relatively ‘complicated’ and therefore usually not taught at the beginner level. In order to learn how to model repeated measures data, a student is often first expected to learn ‘traditional’ statistical approaches and designs. After this foundation is laid, the student can then move to the sorts of models they can actually use for their work, mainly multilevel models that can handle repeated measures data. This approach has several drawbacks: It takes a long time, spends substantial energy on statistical approaches that most will rarely if ever use in their work, and front-loads difficult and abstract concepts before students can start working with data they really understand. As a result, students may become discouraged, become convinced that they’re ‘not good at math’, and may not realize how much they already intuitively understand about statistics.

This book starts with multilevel models and doesn’t look back. It focuses on a realistic and complicated data set, and focuses from (nearly) the start (chapter 4) on realistic models that could actually be used in modern, publishable research.